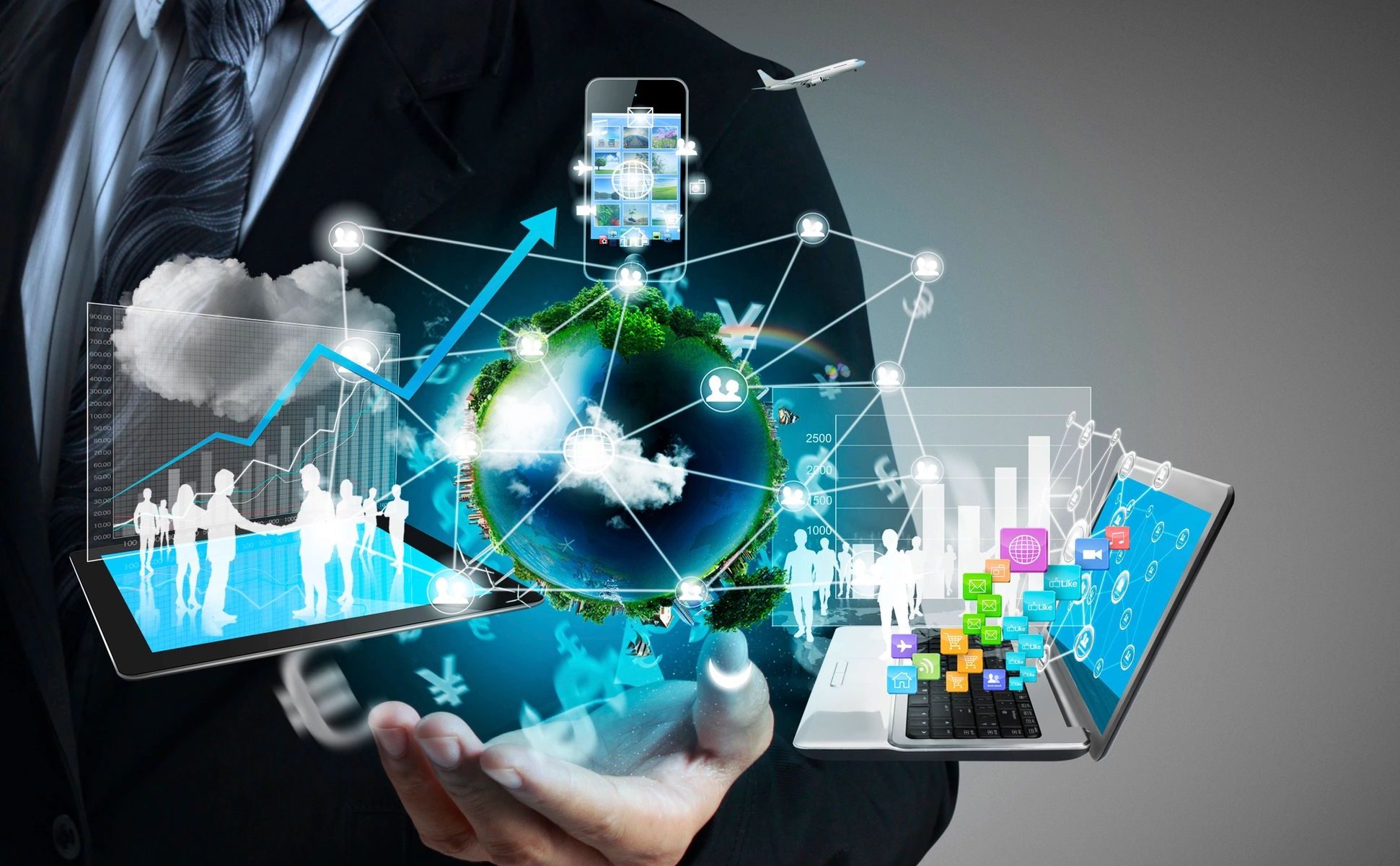 This is the final installment in my four-part series discussing four zones of Mobile Success.  The first post discussed the enterprise zone: the enterprise back end, including mail servers, messaging solution and directory services. The second zone is the enterprise security zone consisting of firewalls, VPN’s and reverse proxy. The third zone I covered was the Internet. All of these function as points of success or failure in mobility.

The final zone is the device user zone, which is probably the zone most prone 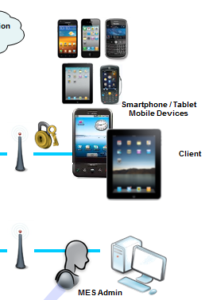 to failures. The zone consists of the user, device, applications and the local wireless carrier. For many reasons, new devices, replacement devices, provisioning, re-provisioning with the carrier messaging system and enterprise often result in a issue and call to the help-desk. The vast majority of interactions occur in this zone, and the more interactions there are, the more opportunity for errors.

From part three of the series, the Internet Zone; data travels the course of the wireless carrier’s wire, fiber, switches and routers until it reaches a wireless tower associated with a device. Then the tower transmits the data to the device. Because a mobile device is an “always on” device, the associated tower can change and must be maintained throughout the day as you travel to different locations.

How does all this magic happen?  When the phone or tablet is turned on, it looks for a tower to associate with.  Once that happens the carrier notes that user Juanita Doe’s device can communicate through tower XYZ, regardless of where a message traffic originates.

As for points of failure, any of the following could apply at the device level:

Below we have the complete picture of the basic mobile enterprise network again. As demonstrated by the discussion in this series, so much technology has to go right for the basics of wireless and mobile applications to work. It takes even more for an enterprise wireless strategy to be effective and successful. For a strategy to be effective it must include mobile management processes, such as procedures and tools including predictive analytics to detect problems, alert the enterprise administrators and help isolate any issues or failures in the enterprise mobile ecosystem.

As mentioned in Part 1 of the series, As an Architect in Mobility for over 17 years now, I have found this diagram and discussion to be extremely valuable tools. 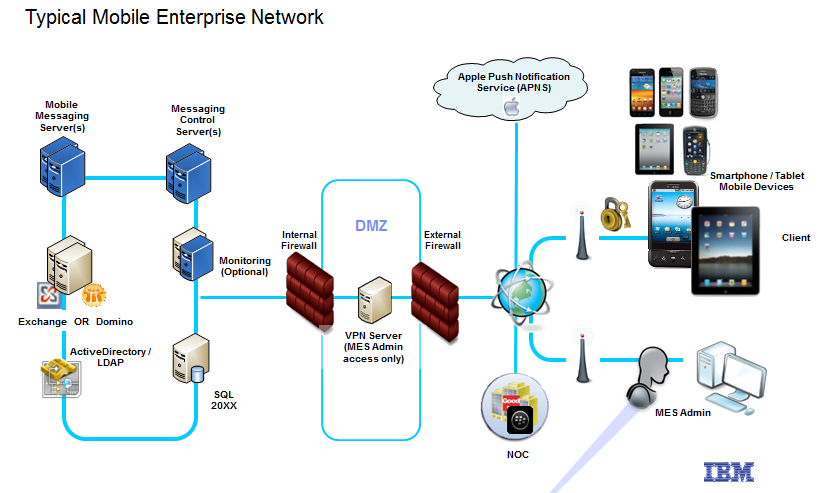 I believe the 1st incarnation of this was in 2003 when an IBM colleague (Scott Symes) and I had the blackeye’s as we experienced the effects of issues in different zones.  It was BlackBerry at the time, hence we gave it the nickname of “BlackBerry Blackeye” chart.  But, as other technologies have come to market, the essentials are still true today regardless of device manufacturer, operating system or application.  The diagram has been updated and expanded reflect some of these changes as Android, IOS Devices, Messaging, Monitoring and MDM/EMM (Airwatch, IBM/Fiberlink, BlackBerry/Good, MobileIron, Tangoe, Zenprise, etc.) have come along. Others have disappeared or been consolidated.  However, the fundamental issues and the concepts remain constant.  There are many points of success and failure in a Mobile enterprise infrastructure. 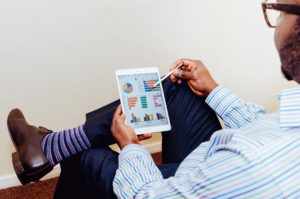 A well designed, planned and implemented strategies, infrastructures and applications will prevent  lost sales due to abandoned carts, increase customer loyalty and repeat use.  Will increase employee productivity and prevent  lost investment in the failure of application adoption

In the simplest of terms, success equals good high quality uninterrupted service.  Applications that consider the diverse screen real estate and user interaction. Unresponsiveness due to back-end servers, load balancing or firewall issues, internet network congestion will be seen as the fault of and blamed on the application.

Mobile success, like beauty, is in the eye of the beholder or in this case the user.  Therefore, the success of a mobile enterprise infrastructure and whether or not you get a “black-eye” depends on how well these points of failure are understood and managed.

It’s my hope this series, revised from original publication at IBM Mobile Insights, has been and will be helpful to you.  Please leave comments below or contact me on  LinkedIn. 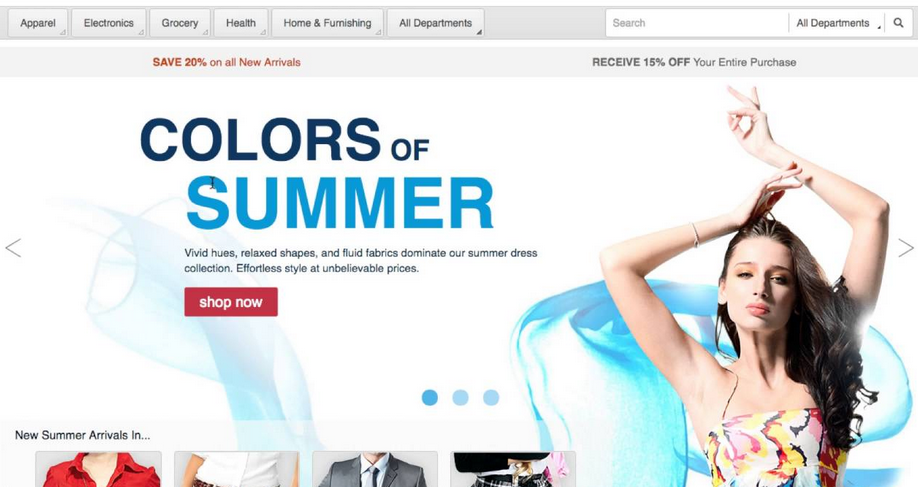 Analytics continues to improve by leaps and bounds. Processing power, data storage capacity, types and amounts of data collected, methods of analysis and presentation to take meaningful action. I narrated and completed a video on my own time in 2015 (in part to learn Camtasia Studio and Tealeaf). It was placed and still hosted on YouTube by IBM. Some some images were provided by colleagues. Other images are actual IBM® Tealeaf®screen grabs of data. “Color of Summer” is from  a current IBM Watson/Tealeaf CX Analytics demo on You Tube analyzing why web shopping carts are abandoned.

Want to learn more?
I suggest a look at the following links for more information:

Please leave comments below or contact me for further discussion on LinkedIn.